In a world full of shoulds, what do we actually want?

As a counsellor and coach I hear “should” more than anything else. In nearly seven years of practice, I've yet to hear a credible one.

You have a set of principles that have been shaped by your family, your environment, your social conditioning and even popular culture. These principles unconsciously direct your behaviour. They take you by the hand and guide you through life.

These are your ‘shoulds’, and they are holding you back.

‘Shoulds’ feel like an inarguable fact, but in reality, they’re an internal narrative of limiting thoughts and belief systems that form the basis of a life script. Without the appropriate awareness, you’ll play this script throughout your life and, despite its tendency to hold you back, you’ll likely never question it.

I recently had a disagreement with my dad. This in itself is not a wholly unusual thing, my dad and I are close but have incredibly different worldviews and equal measures of tenacity when it comes to making our point.

Typically, my dad is a true master of conflict and debate; he is well read, he is quick thinking and he’s not afraid to speak louder than anyone else. However, this disagreement was different. His argument hinged on the idea that a human created concept shouldn’t be questioned, altered or compromised because… well… simply because it shouldn’t. In this case, it was the “appropriate” use of the English language when referring to topical themes such as non-binary gender, which clearly post-date the development of our grammatical rules.

It was an infuriatingly weak argument on his part. Not because we didn’t agree but because what he was demonstrating is the rigidity of thinking that inhibits change.

It was incomprehensible to him that we could consider challenging a grammatical structure in order to address a societal shift and an evolution of our vocabulary. Who cares that our language was developed at a time far removed from the world that exists today? The ‘should’ was in his mind fact and therefore it could not be challenged.

Someone once said to me, ‘a fact is simply a theory yet to be disproved’. And I love that. Because it means everything can be questioned, and everything is up for grabs.

The shift from ‘should’ to ‘want’

In my therapy work, I like to task clients with an “I want” exercise. For one week, every time they notice themselves saying or thinking “I should...” they must switch the word ‘should’ with the word ‘want’ and see how the sentence unfolds. It’s always a hit. Aside from the endless new opportunities that present themselves in that Week of Want, it’s a great practice to actively choose how we wish to live our lives and to start challenging those core beliefs that limit our growth.

Zoom out and we begin to see that our entire societal structure was born out of core beliefs; projected fears and principles created a system that we, the people, uphold. Our society is rife with ‘shoulds’, most of which no longer serve us (and for many, actively reject or abuse).

Abiding in this societal script of ‘shoulds’, we align our lives to an expectation that doesn’t exist and overlook the endless possibilities of trying something different and being something else.

Our personal and societal systems can't change until our facts are challenged, and outdated beliefs won't evolve without the appropriate awareness and subsequent disruption.

Bringing our ‘wants’ to work for authentic change

After that Week of Want, my clients will tell me how much easier they found it to make decisions. Not only that, but they’re often blown away by the amount of progress, or new experiences, that result from the exercise. Typically, when we’re torn with making a decision it’s because we’re grappling between what we believe we should do and what we actually want to do.

So could thinking in ‘wants’ instead of ‘shoulds’ at work lead to more action and result in more productive decisions?

The idea of exercising a ‘want’ mentality at work may feel at best intimidating and at worst careless, radical or selfish. I would challenge that with ‘should’ comes expectation and with ‘want’ comes meaningful action. The key really is to find your root want - the one that sits deep at your core — and let that guide you.

“We should be more diverse.”

“We want to be influenced by new thinking and hear alternative perspectives.”

On the surface, these statements may appear to be saying the same thing, but the intent is starkly different — one will result in authentic deep-rooted change and one will not.

There is no such thing as ‘should’.

There really isn’t. It’s an imagined standard against which we judge our reality. Not only does it put unreasonable demands on ourselves and others, but it inhibits our ability to change circumstances, behaviours, and systems.

When people talk about ‘thinking outside the box’ this to me is what they mean, and it’s a great place to start: What are we assuming as ‘fact’? What beliefs are limiting our thought process? What do we really want to achieve?

This is where true innovation and change really start to happen.

I challenge you to replace your ‘shoulds’ with ‘wants’ and embrace the growth that follows. 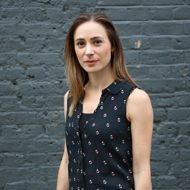