A community voice in Blackpool

In June 2019, Blackpool Council declared a climate emergency starting with a commitment to making sure the council’s own activities become net zero in carbon emissions by 2030. To put their citizens at the heart of shaping the future of Blackpool, we facilitated the town’s first citizens' assembly on climate action.

A desire for change

Blackpool is a large town and seaside resort on the Lancashire coast in England. Well known as one of England’s favourite tourist destinations, it receives around 10 million visitors each year. Yet it’s one of the most deprived local authority areas in the country.

Despite one of the challenges around deprivation often linked with low levels of community participation, we were delighted to see huge enthusiasm for the assembly. After sending 8,000 letters to randomly selected residents asking if they wanted to take part, we received a large number of replies from all parts of the community. The energy within the community for improving their place and getting involved in the climate response was clear.

When Eric*, a 78-year-old man living in sheltered accommodation, received his letter to join a citizen assembly on climate action in the post he knew he wanted to take part. Distressed by the news he’d seen about climate change, Eric was passionate about learning how he could make a difference in his family’s future.

"I’d been busy with family and work, and didn’t know what I could do as an individual to make a difference, other than sorting my recycling into the right boxes."

Before the first assembly, Eric received a welcome pack in the post, with helpful information about what assemblies are, examples of where they’ve been successful, and a list of terms and tips for taking part.

Eric was excited about making new friends in his hometown and learning about an entirely new topic. But he had concerns about the Covid-19 restrictions and his technical skills, unsure if he’d have the knowledge and ability to take part in an entirely virtual assembly.

"At my age, I didn't think I’d learn about a new topic again, but you’re never too old to learn something new."

To help calm Eric’s nerves and boost his confidence, I reached out to Eric and other residents who were also feeling anxious about the idea of an assembly that’s entirely online, which required learning digital skills. Together, we worked through his concerns and the software we’d be using. I showed him how to create an account, log in and use different functions such as chat, video, microphone and how to access breakout rooms.

"The Zoom training must have worked because I got into all the meetings with no issues."

In the first assembly, we discussed the council’s commitment to climate action in Blackpool. Experts also shared information on the causes of climate change and potential solutions. Eric was delighted to be able to listen to different experts, learning more about a topic he was interested in from the comfort of his own home.

Afterwards, facilitators took the time to get to know the residents in smaller teams, focusing on how we could all work together in a respectful way. Residents had a space to openly share their thoughts on what they’ve heard and the impacts of the climate crisis they’re already experiencing in their own lives. This helped Eric feel confident his voice was a valued part of the conversation in his community:

"I started really looking forward to Tuesday evenings. I’m not someone who talks a lot, I like to use my eyes and ears, but when I wanted to contribute, I was able to."

Each team came up with different solutions around different topics, including ideas around natural resources to generate and buy clean energy, transport and education. Eric was eager to begin looking at the climate issue in-depth with his neighbours, brainstorming ideas specific to his experiences in life and solutions using Blackpool’s local resources.

Residents moved across breakout groups to contribute ideas to other areas they were passionate about and had an interest in. During the final session, Eric joined two different teams that were discussing how to reduce emissions from transport and ways to encourage education and awareness.

Eric then shared his views on how Blackpool could reduce emissions from transport and educate the wider community. Presenting back to the assembly, he was proud to see his recommendations were included in the final report:

"It was good that the council listened, and I look forward to seeing things happen now."

After taking part in shaping the local climate response through the first assembly in Blackpool, Eric told us about another benefit of getting involved, one even closer to his heart:

"I haven’t seen my grandchildren for a year, and now I can use Zoom, I’ll be able to call them and see their faces."

A community involved in shaping their place

Blackpool is passionate about putting citizens at the heart of this decision making process. Through this assembly, they’ve been able to engage a diverse group of people to hear their views on how Blackpool can do better.

The council now has a report and recommendations for becoming net zero in carbon emissions by 2030 that have been entirely shaped by the voices of their residents. 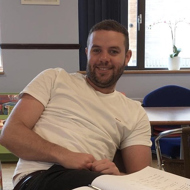